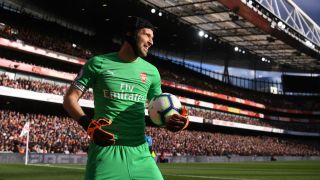 Cech has drawn criticism for his apparent discomfort in playing the ball out from the back as new boss Unai Emery's tactics demand, but made a string of crucial saves in Sunday's 2-0 Premier League win over Everton.

There have been calls for recent signing Bernd Leno to be given the gloves permanently, but Seaman - who played for the Gunners between 1990 and 2003 - believes Cech's shot-stopping ability makes him undroppable.

"He totally deserves to be in the team," Seaman told reporters at the FIFA Best Awards.

"Every game, he has four or five saves to make and he makes them.

"The only question mark you put on Cech at the moment is playing out with his feet, but that's because the way Arsenal are playing is not the right way at the moment. We try to play straight out to the wide players, and it's not working.

"Cech's got a very good left foot, his right foot's not very good, so put the ball on his left foot.

"When I was playing it was different, but I hated the ball on my left. I always wanted it on to my good foot so the defenders have to know and they have to realise.

"He's getting them out of a lot of trouble because every game he has four or five saves to make."