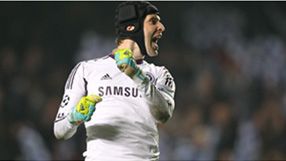 The Blues progressed to the last four of the competition, the sixth time they have done so in nine years, after securing a 3-1 aggregate win over Portuguese side Benfica.

The win saw the West London outfit set-up a mouth-watering semi-final encounter with the Catalan giants.

And despite failing to overcome the defending European champions the last time the two sides met at the same stage in 2009, Cech insists they would always have had to face them if they are to win the competition for the first time in their history.

"You dream that you win the Champions League once in your life," he told his own website.

"We just progressed through to the next round and still have a chance to fight for the trophy.

"Now we are facing the world's best football club but it was almost a certainty that if we got far we would probably play against them. You cannot look to the left or to the right at this stage.

"Anything is possible in football and if you look back at our previous meetings you can see that almost all the matches were tight and decided by details.

Many believe Chelsea were lucky to overcome Benfica in the quarter-finals after Javi Garcia levelled the scores on Tuesday night after Frank Lampard’s opener.

A late strike by midfielder Raul Meireles confined the Eagles to a last eight exit, but the Czech Republic international concedes the Blues made things harder for themselves on the night.

"We got past a team that played superbly in both games. We achieved what we wanted," he added.

"But we complicated this game for ourselves unnecessarily.

"We could score a second goal much earlier and it would have sorted it out.

"We had some huge opportunities to do that but managed to add a second goal only in the additional time.

"In the end all turned out good for us and a week later nobody will ask how we progressed. The most important thing is we are in the semi-finals."

Should Chelsea overcome the La Liga giants over the two-legs later this month, they will come up against either Real Madrid or Bayern Munich in the final at the Allianz Arena in May.