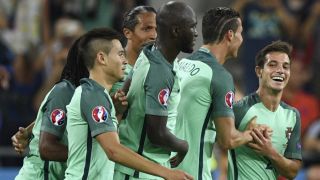 Portugal defender Cedric Soares says winning is all that counts after his side defeated Wales 2-0 to book a place in the Euro 2016 final.

Fernando Santos' men will meet hosts France or world champions Germany in Sunday's final after quick-fire goals from Cristiano Ronaldo and Nani early in the second half proved decisive in Lyon.

Portugal have been criticised for their style of play en route to the final, but Southampton stopper Cedric is unconcerned and hailed the country's achievement.

He told reporters: "This is all about winning and that's why we are going to Paris. France and Germany are both amazing teams, but we will prepare the best we can for the final.

"It's amazing. Incredible to be in the final, it defies description but we have earned this, we deserve the congratulations.

"We were united, focused, but we have to congratulate Wales too, it was the first time they reached the semis, we knew they were a good team but we came out on top."

Portugal goalkeeper Rui Patricio lauded his team's fans and said all eyes were on trying to claim a maiden European title.

"It’s something special not only for myself but for all the players, the staff, the Portuguese people and all the entourage with us," he said, via UEFA.

"And, of course, it’s special for all the Portuguese immigrants in France and everyone in Portugal and all over the world.

"They have always kept cheering and rooting for us - they have suffered with us until now.

"Congratulations are due to everyone. Now we have to enjoy the moment to its fullest. After that, we have to get ready for the final. We are going to Paris to win."