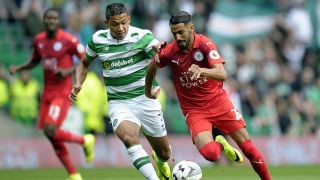 Riyad Mahrez gave a reminder of his importance to Leicester City with a stunning solo goal in their 1-1 International Champions Cup draw with Celtic on Saturday.

The Algeria international has again been heavily linked with Arsenal in recent days, with some reports claiming a deal worth £41million has already been agreed between the Gunners and the Premier League champions.

Mahrez, the PFA players' and fans' player of the year last season, lit up Celtic Park early in the second half to underline why such huge figures are being touted, skipping beyond two defenders before bending a stunning shot beyond Craig Gordon.

But Celtic, who matched Claudio Ranieri's side well throughout, found an equaliser when Eoghan O'Connell fired in off the post from the edge of the area.

Brendan Rodgers' side finished the stronger but were unable to find a second goal, and Leicester snatched a 6-5 victory on penalties, Daniel Amartey converting after Kasper Schmeichel had denied James Forrest.

Celtic looked bright in the opening 20 minutes and twice called Ron-Robert Zieler into action, with the Germany international denying Leigh Griffiths from close range before reacting well to keep out Moussa Dembele's effort.

Mahrez was a whisker away from breaking the deadlock on 24 minutes, though, skipping infield before bending a shot narrowly past the far post after bringing down Danny Drinkwater's raking long pass.

Ben Chilwell headed straight at Gordon after a glorious cross-field pass from Mahrez, before Zieler was again called into action to deny Griffiths from a free-kick.

Just over a minute into the second half, Mahrez made his mark. Driving into the area from the right, he bamboozled O'Connell and Emilio Izaguirre with quick stepovers and a sharp turn onto his left foot, before curling a sumptuous finish into the far corner.

O'Connell took matters into his own hands to restore parity on 59 minutes. As the ball broke loose on the edge of the area, the full-back instructed team-mates to stand aside before sweeping a low right-footed shot in off substitute Schmeichel's left-hand post.

Mahrez almost set up substitute Ahmed Musa for a winner, driving to the byline before crossing just behind Leicester's record signing, before he was taken off to applause from both sets of fans as Ranieri and Rodgers rang the changes.

Neither side could carve out a match-winning opportunity in the closing minutes, leaving a penalty shoot-out to decide the winner. Forrest saw his effort saved as Schmeichel dived well to his left, allowing Amartey to shoot high into the net to secure the win.