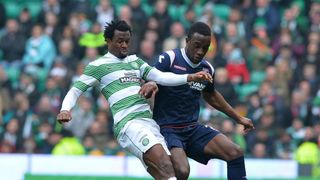 Celtic eased to a 2-0 victory over Ross County on the opening weekend of the Scottish Premiership on Saturday - goalscorer Leigh Griffiths' injury the only sour point for the hosts at Celtic Park.

Ronny Deila's side are widely expected to win the title for a fifth year running and were only briefly troubled against County.

In between first-half goals from Griffiths and Stefan Johansen - the striker was forced off with a muscle problem, which represents the only downside for Deila ahead of their UEFA Champions League qualification third round second leg against Qarabag on Wednesday.

Celtic needed just four minutes to move top of the table as Andrew Davies endured a difficult start to his competitive Ross County debut - bringing down Griffiths to concede a penalty.

The former Bradford City man clipped Griffiths' calf, with the striker composing himself to tuck the opener past Scott Fox.

However, that positive start was offset when Griffiths was forced off with an apparent muscle strain 20 minutes in.

Regardless, Celtic were in full control by the break thanks to Johansen - the midfielder powering home his side's second having been played in by Gary Mackay-Steven.

However, Celtic regained their composure and saw out the win with relative ease, Kris Commons spurning a late opportunity to extend the lead when he dragged an effort wide.