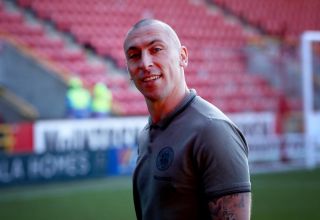 The video assistant referee will be in use for the first leg of the last-32 clash at the Parken Stadium.

The implementation of VAR in English football has brought widespread criticism, although Russian referee Sergey Karasev will use the pitchside monitor as opposed to external referees making decision elsewhere which has been a source of the complaints.

Brown, speaking at the Parken Stadium, said: “It will be something different for us.

“We know not to get too carried away if we do score and after that hopefully we get the correct decision.

“We had it in a friendly at the start of the season and it is one of those ones that you just deal with it and get on with it.

“I think all technology going forward is good for the game.

“There are always some teething problems but eventually they are going to make sure it is a lot quicker and makes the flow smoother. I am sure they will get it sorted in a couple of years.”

Manager Neil Lennon is also interested in how VAR pans out against the Danish side.

The Northern Irishman said: “I will be needing a little bit of patience and hopefully not tinged with frustration.

“It will be an interesting concept because obviously we have not used it before but the decision is solely with the referee and not a committee elsewhere.”

Celtic could not be in better form having won nine out of nine in all competitions since the turn of the year.

However, Brown tempered too much expectation of the Scottish champions.

The veteran midfielder said: “As soon as were in the group stages we wanted to get European football after Christmas and we have managed to tick that box.

“We will worry about one game at a time and hopefully we will get a good result tomorrow and take them back to Celtic Park next week.

“We want that good run in Europe but you don’t want to get too carried away and start talking about that just now.

“It is one step at the time. It is going to be hard game but over the two legs we need to make sure we perform and score goals and it is all about how we play.”