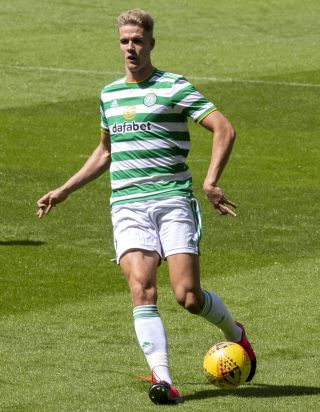 Kristoffer Ajer wants Celtic to show why they are champions after a long-awaited return to action.

Neil Lennon’s side got their Premiership season off to an impressive start with a comprehensive 5-1 win over Hamilton at Parkhead last Sunday, after the ninth successive league flag was unfurled.

It was Celtic’s first competitive game since March when football was stopped due to the coronavirus crisis, with the Parkhead club subsequently declared league winners.

Ahead of the match against Kilmarnock at Rugby Park on Sunday, 22-year-old Norway defender Ajer told Celtic’s official website: “Everyone has been really excited to get going again after such a long break.

“To finally be back playing is a good feeling and the whole squad is excited to show what we can do.

“We’ve been eager to put on a performance after all the hard work during pre-season. Every season is a massive season when you play for a club like Celtic.

“That is never easy so we have to work hard in training to make sure we can live up to the expectations when we go out on to the pitch.

“We all love that kind of pressure and we’ve missed it, but that time away from football has only made us hungrier for more success.

“When you play for Celtic you always want to win every game you play. We go out there to impress in every game and show our qualities.

“Every team wants to beat us and take points off us and we know that so we have to be at our best in every game and stay focused.”

Ajer spent the second half of the 2016/17 season on loan at Kilmarnock and he stressed that it was key to his development.

He said: “As a young player it’s important to play as many games as you can at the highest level.

“If you get a chance to go out on loan to a team in the Scottish Premiership it’s really beneficial for young players.

“It also gets you used to the pressure of playing in front of a lot of fans as well.

“I came back to Celtic a more experienced player and that helped me to get into the team and handle the expectations of playing at that level.”