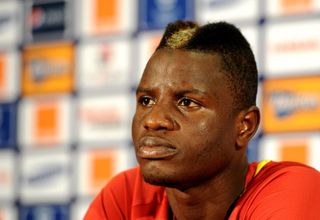 The 24-year-old goes straight into Celtic's squad for Sunday's trip to Dundee and he could make his debut at Dens Park.

Wakaso has 19 caps for Ghana and faced Germany and Portugal at the World Cup earlier this year.

"Celtic have signed Mubarak Wakaso on a one-year loan deal with the option to buy," read a statement on the club's official website.

"The Ghana international will go straight into Ronny Deila's plans for the visit to Dens Park at the weekend."

Having started his career with Ashanti Gold in his homeland, Wakaso went on to enjoy spells at Elche, Villarreal and Espanyol in Spain before joining Russian side Rubin in 2013.

Wakaso's arrival brightens up a miserable week for Celtic, who were knocked out of the UEFA Champions League play-offs on Tuesday following a 2-1 aggregate defeat to Maribor.

Celtic also slipped to a 1-0 defeat at Inverness Caledonian Thistle last Saturday and the Glasgow outfit will seek a swift response at Dundee.