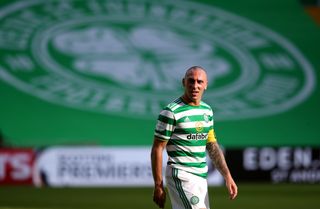 Celtic captain Scott Brown hopes the first step to getting fans back into grounds in Scotland goes off without a hitch.

There have been no supporters at football games in the country since March due to the coronavirus crisis.

The Hoops’ Premiership match against Ross County in Dingwall on Saturday has been chosen as a test event with 300 allowed in the Global Energy stadium.

Aberdeen’s home game against Kilmarnock will also have up to 300 fans in attendance.

However, the date for general phased reopening of stadia in the country has been moved back from Monday until October 5 at the earliest.

Brown said: “It will be good just getting fans back in.

“It’s crucial that we get fans back into the stadium and that we start playing in front of them yet again.

“But we need to do it safely and so this is a little test for us and here’s hoping it works well.

“For us, it’s all about getting the fans back in as safe safely as possible and here’s hoping we can do that very soon.”

Brown was speaking on the day that St Mirren goalkeeper Jak Alnwick was confirmed to have tested positive for Covid-19 with Hamilton defender Lee Hodson, his housemate, also having to self-isolate.

The former Scotland captain noted the precarious situation, saying:
“Obviously it’s very delicate but the club try to do as much as we possibly can and we’ve had our tests and have been negative.

“So we’re just trying to focus on ourselves.

“We look forward to get back to playing games as and it is a huge game for us on Saturday coming.”

Brown recharged his batteries during the international break and is relishing the return to action.

“We know Dingwall is always a hard place to go,” said the midfielder.

“Here’s hoping we get some nice weather for a change.

“The pitch should be good and both teams will want to play football as well.

“I imagine it’ll be a battle, one which both teams will want to win, but we need to make sure we win that battle in the first 10 minutes, get the ball down and start playing our normal game.

“Here’s hoping we have a good performance, we work hard, press Ross County high up the pitch and create chances.”