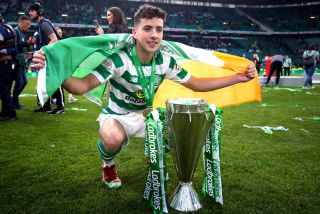 Mikey Johnston ended the Ladbrokes Premiership season in style as his double fired Celtic to a 2-1 win over Hearts on Sunday.

Both managers put out much-changed sides ahead of next week’s William Hill Scottish Cup final at Hampden Park, but the 20-year-old winger retained his place from the Rangers defeat and he showed why with a second-minute opener.

Jambos attacker Jake Mulraney levelled in the 17th minute but Johnston popped up with six minutes remaining to score the winner before the Hoops were presented with the league trophy for the eighth successive season.

Johnston, named man of the match, said: “It was a brilliant way to finish off the season and trophy day.

“Scoring goals has been something I’ve been trying to add to my game, to be a bit more effective, to score more goals, to create more.

“I did that and I was really pleased to contribute to a really good team performance.

“We felt the pressure slightly going into the game, but you’ve got to block all of that out and show a bit of confidence because it’s been tough.

Johnston is determined to carry on the momentum into next season and beyond.

He said: “The manager, the players and backroom staff, they trust me and have shown belief in me so hopefully I can keep repaying them.

“When you’re a forward, it’s hard to play when the team overall perhaps hasn’t played well.

“It was all about bouncing back, and we’ve shown that.

“We’ve played well as a team, and I think that will always help the forwards. An early goal will also help calm the nerves too, so it was good to do that. Personally, that helped settle me and gave me a bit of confidence.”