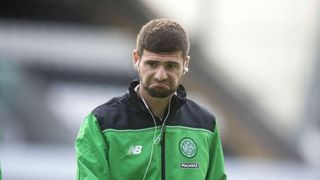 New Celtic signing Nadir Ciftci will miss the first six games of the Scottish Premiership season after he was found guilty of biting Jim McAlister in the Dundee derby last season.

Ciftci, who was playing for Dundee United at the time, sank his teeth into the leg of McAlister during a 3-0 win at Tannadice on May 24.

The Scottish Football Association imposed an eight-match ban on Ciftci - who moved to Celtic earlier this month - for excessive misconduct, with two games suspended until the end of the 2015-16 campaign.

Referee Bobby Madden did not see the incident during the game, but the SFA decided to take retrospective action.

The 23-year-old is still able to play for Celtic in the UEFA Champions League, with the Glasgow club 2-0 up in their tie second round of qualifying tie against Stjarnan ahead of Wednesday's return fixture.