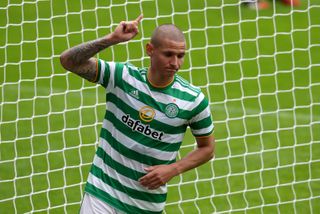 Celtic striker Patryk Klimala feels studying on and off the park has helped him hit the ground running in pre-season.

The Polish striker has earned praise from manager Neil Lennon for staying in Scotland during quarantine and working on his English and fitness.

Klimala joined Celtic in January from Jagiellonia and only managed one start and three substitute appearances before lockdown.

The 21-year-old has used the time well and Lennon believes his demeanour and confidence have transformed ahead of the new season.

“I worked really hard during the break from football,” said Klimala, who netted twice in Celtic’s 3-1 friendly win over Hibernian on Monday.

“I had two sessions a day plus then I also did an English lesson for two hours.

“I was tired when we started back the pre-season, but now I feel in good shape.

“My focus was not on going back (to Poland) during the quarantine. I wanted to remain here and do hard work because I didn’t have a pre-season during the winter break.

“I didn’t feel that good, but everything has now come back to normal for me. It was important for me to have a routine.”

“I have learned a lot of things from Odsonne during this pre-season,” he said. “I think it was really good for me and now I can try to use some of these things on the pitch.

“Sometimes we talk about it, but really I just watch how he plays on the pitch.

“Odsonne plays the game differently from me, but there are many things that I like that he does and I can learn from him.”

Klimala played alongside Leigh Griffiths for the final half hour on Monday and benefited from two assists from his fellow striker, the first one tapping home the Scotland forward’s goal-bound shot from close range.

“I worked hard on the pitch to get this goal and I was happy with it.

“I enjoyed playing alongside Leigh. I am working hard and I am feeling in good shape. The final decision of who plays in the games will be down to the manager, that’s it.”