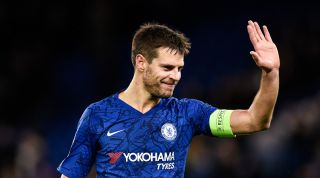 Cesar Azpilicueta admits Chelsea have faltered at Stamford Bridge at times this season.

Lampard said his team were "outsiders" for Champions League qualification after they failed to make a signing in the January transfer window.

The Blues remain in the driving seat but could have been even further clear in the race for fourth had they been stronger at home.

Chelsea have won only five of their 12 matches at Stamford Bridge, and Azpilicueta believes they must improve in upcoming home games against Manchester United, Tottenham and Bayern Munich, who they face in the last 16 of the Champions League.

"We haven’t made Stamford Bridge as solid as we would like this year. This is the best time to recover this solidity, with three big games in a row at home where we can show we are ready and able to make Stamford Bridge a tough place to come," he told Chelsea's official website.

"With the fans we have had some disappointments at home altogether. When these three opportunities come we have to take them one by one, and hopefully we can build up on this. It’s key for the success of the season."

Chelsea are currently on their winter break and do not return to action until Manchester United's visit to west London next Monday.

And Azpilicueta says he and his team-mates are relishing the opportunity to recharge their batteries.

"It’s nice to have a few days to switch off," he added. "At the top level you need a high level of fitness, but also on the mental side you need to be focused and concentrated.

"With this break we have the chance to switch off for a few days, and get some fresh air. Then we will come back, do some work, and kick on for the last three or four months of competition with the power of the break behind us.

"They did well to fit it in the middle of the season, which is not easy with the busy schedule. I will have some time with my family, and live without any rush or any travelling.

"It’s nice to spend time with them. They support me through the year, and at the weekends we are off travelling. For us to spend a nice time together is important."