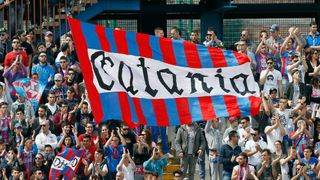 There was further humiliation for Catania after being demoted to Italy's third tier for match-fixing as they were on the end of a 4-1 Coppa Italia hammering at home to Cesena.

The Sicilian club finished 15th in Serie B last season and narrowly avoided the drop by two points before Catania discovered their fate on Thursday for their involvement in the 'Goals Train' scandal that centred on the fixing of games.

And Cesena heaped further misery on Catania later in the day, winning comfortably to proceed to the fourth round.

Juan Ramos cancelled out Loris Bacchetti's own-goal just before the break, but Catania were put to the sword after the interval.

Milan Djuric gave Cesena the lead again just after the hour mark and a two-minute double courtesy of Camillo Ciano shortly after wrapped things up for the visitors with 23 minutes still to play.