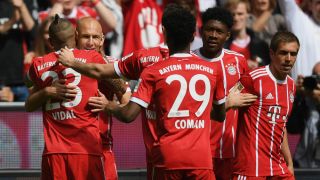 Bayern Munich have finished a Bundesliga season without a defeat at home for the first time since the 2007-08 season.

Carlo Ancelotti's side defeated Freiburg 4-1 on the final day to make it 13 wins and four draws from their 17 games at the Allianz Arena in 2016-17.

The champions, who celebrated with the trophy after the final whistle, have not gone without defeat at home in a single top-flight season since Ottmar Hitzfeld was in charge nine years ago.

It was also the 250th Bundesliga win for captain Philipp Lahm who, alongside Xabi Alonso and Tom Starke, played his final match before retirement.

The match, which was Bayern's 300th competitive outing at the stadium, also saw one of their former strikers break a Bundesliga record.

Nils Petersen struck Freiburg's goal to become the most lethal substitute in the competition's history, having now scored 19 times off the bench, surpassing the tally set by another ex-Bayern man Alexander Zickler.