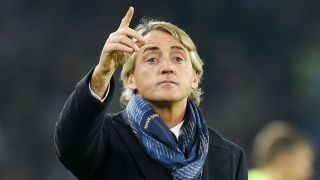 Inter head coach Roberto Mancini understands that another year spent outside of the Champions League would be intolerable for his club.

The San Siro side sit top of Serie A at the mid-season break having picked up 36 points from their first 17 games, although the top five teams in the table are separated by just four points.

Mancini is still reluctant to publicly state that Inter are capable of winning the Scudetto, but he concedes a failure to finish in the top three and seal a return to Europe's elite club competition would be unacceptable.

"Our aim is to get back into the Champions League," he told Inter Channel when asked about his goals for 2016.

"Not playing in the Champions League cannot happen for Inter.

"It is not easy to put a team together but if you have the passion, desire and hard work you get the results you deserve eventually.

"Inter have not been where they have deserved to be over the last few years. With the history this club has, it should be playing in the Champions League and challenging for the Scudetto every year.

"That has to be our target and I am glad president [Erick] Thohir chose me."

Mancini is unwilling to discuss the prospect of Inter having a chance of winning the league until much later in the 2015-16 season.

"We are up there for now and if we can stay there until the last three or four games then we will be able to talk about it," he said.

"It is exciting at the moment with five teams bunched together within four points. There is still a long way to go and we need to knuckle down and focus on the first game back after the break – that and the last one before Christmas are the trickiest.

"All the lads have given their all so far and if we are up where we are it is thanks to the entire squad. It is an honour for me to be at Inter and hopefully we can have a really good 2016."

Inter are back in action with a trip to play in-form Empoli, who have won four consecutive matches, on January 6.