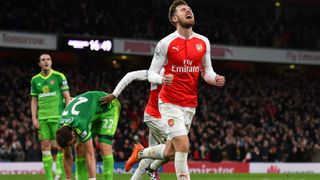 Aaron Ramsey has called on Arsenal to create enough opportunities to beat Olympiacos by the two clear goals that would seal qualification for Champions League knockout round.

Arsenal are three points adrift of second-placed Olympiacos and must win by either two clear goals or score at least three times in Greece on Wednesday to give themselves a chance of finishing in the top two in Group F top two.

Ramsey, whose Arsenal lost their opening two fixtures in the group, said: "We will always create opportunities – just hopefully we can stop Olympiacos, keep a clean sheet and grab a couple of goals ourselves.

"It was never going to be easy after the start we had in Europe but we have done well to come back into the position that we find ourselves in and it is in our hands – we know what we have to do."

Ramsey was on target in Arsenal's 3-1 Premier League win against Sunderland on Saturday after playing in his preferred central position.

The Wales midfielder added: "We have been here a few times before. It is really difficult, we have come up short a lot of the times in Europe. But we know what we have to do and we believe we have enough quality to create the opportunities and score.

"Hopefully we can do that and keep a clean sheet. It is a different situation, we have to go out there and win 2-0 and that will be enough."