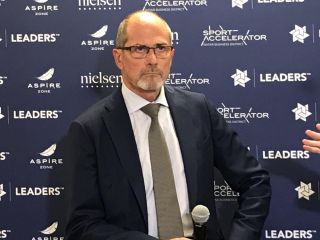 Consensus over the future format of the Champions League is unlikely to be reached for at least a year, according to the boss of the European Leagues group.

Lars-Christer Olsson says there is “no need to rush” a decision on how European competition will look from 2024-25 onwards, but says any proposal for promotion and relegation and basing qualification on anything other than domestic performance was “a no go”.

The Swede, a former chief executive of UEFA between 2003 and 2007, said he expected an agreement could be reached next autumn, or even as late as spring 2021.

Olsson, whose umbrella body represents 36 professional leagues across 29 countries, said there was unanimous support from those present for the principle that domestic leagues should be protected, and remain the route into European competition.

Juventus president Andrea Agnelli, who is also the chairman of the European Club Association, had backed a system of four groups of eight in the Champions League, meaning more group stage games, and suggested that the top 24 would qualify for the next season’s Champions League.

“If we are listening to all those who have been active on Thursday at our clubs advisory platform and on Friday in our discussions with the leagues, it’s a no go to propose a closed league on top of the European pyramid,” Olsson said.

Olsson also referred to comments made by Chelsea manager Frank Lampard, who addressed delegates on Thursday afternoon, about the primacy of domestic competition.

“He was not asked to have an opinion but he said on his own that he doesn’t want to see a closed league,” Olsson added.

Lampard talked about the importance of Premier League teams having the “carrot” of reaching Europe via their domestic league, and expressed fears that additional European games could lead to player burnout.

“The year Chelsea won the Champions League (2012) we came second the year before,” the Blues boss, a former favourite as a player at Stamford Bridge, said.

“We know the format, we know what it is, but whenever you play in the Champions League you know you’re playing against the best and for me that is the format and the beauty of it.

“You have to leave the carrot of being competitive. You look at the Premier League table – Leicester, they’re getting excited, what can they do? Other teams like West Ham and Everton, teams that are spending and moving forward, trying to get into that bracket because they know the rewards of that.”

On the subject of playing more matches, he said: “As a manager I actually feel the weight of games more than I did as a player.  As a manager you’re thinking about how can you keep the team fresh, and it’s a challenge with all the competitions we have now.

“If you ask me can we play more European games, I personally don’t believe you can fit them in amongst our busy schedule. I would find it hard to keep the quality level and the freshness within the players.”

Olsson agreed that in his view there was no scope within the match calendar to fit in any more European club games.

“We are not in favour of reducing, for example, the number of teams in a domestic competition or taking the (domestic) cups away from the calendar,” he added.

Olsson said one area that was in need of reform was the distribution of the revenue generated in European competition.

He said that was vital in order to make the new third-tier event – the Europa Conference League which starts in 2021 – financially attractive for the sides who will compete in it.

For the current season, UEFA estimates the revenue available to distribute to clubs is 2.55 billion euros (just over £2.2billion).