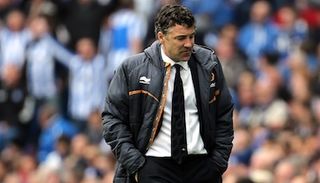 In total there were 19 managerial casualties in the Championship – the highest of England’s four leagues – 13 sackings and six resignations.

Seven second-tier managers were sacked within a year of being appointed, five of them within just six months of landing the job.

In the Premier League, the average tenure of dismissed managers stands at 2.81 years – boosted by the sacking of long-serving Stoke City Tony Pulis after almost seven years. Without the much-maligned Welshman it would be a much lower 2.22 years.

After Sir Alex Ferguson’s retirement and David Moyes’ subsequent move to Old Trafford, Arsene Wenger is the runaway leader at the top of the loyalty charts. His 16.7-year spell at Arsenal is followed by Paul Tisdale’s seven years at Exeter City.

Meanwhile in League Two, average managerial tenures leapt to 2.57 years from 1.46 thanks to the dismissals of Terry Brown from Wimbledon and Micky Mellon of Fleetwood. League One’s average marginally improved from 1.39 to 1.37 years.