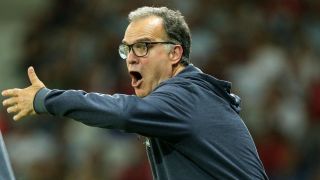 Marcelo Bielsa will take on newly relegated Stoke City in his first game in charge of Leeds United as the Championship club aim to regain promotion to the Premier League after a 14-year absence.

The former Argentina coach lasted just 14 games in his last role at Lille in Ligue 1 but he has excited supporters with his arrival at Elland Road, where he replaced Paul Heckingbottom, whose four-month spell in charge yielded just four wins.

Gary Rowett's Stoke will travel to Yorkshire on Sunday August 5, two days after Frank Lampard makes his managerial debut in charge of Derby County, who play away at Reading on August 3.

After the trip to the Madejski Stadium, Lampard will take the Rams to Elland Road on Saturday August 11 before a trip to Millwall a week later.

Aston Villa manager Steve Bruce, whose side missed out on Premier League promotion in a play-off final defeat to Fulham, returns to his old hunting ground at Hull City on Monday August 6, while newly promoted Wigan Athletic travel to Hillsborough for their opening game against Sheffield Wednesday on August 4.