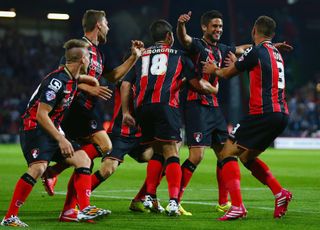 Eddie Howe's side have rocketed up the league table after five wins on the trot, lifting them to second, just two points behind leaders Watford.

Bournemouth next meet a Wednesday side without a win in seven Championship matches on Tuesday and will hope to replicate their 2-1 win at Hillsborough last season.

Surman feels confidence is sky high at Dean Court and there is a belief within the squad that Bournemouth can beat anybody at the moment having also reached the League Cup quarter-finals with victory over West Brom last Tuesday.

"We've played enough of the teams now to know there is nothing to fear and we deserve the position we're in," he told BBC Radio Solent.

"No one expected us to be this high in the league. We did, because we know what we've got here.

"We are not looking at what everyone else does, that's not important if we keep winning games we will be there or thereabouts."

Leaders Watford rose to the top of the table last weekend and head north to Birmingham City in midweek in Gary Rowett's first home game in charge.

Middlesbrough and Wolves are both level with Bournemouth on 27 points and face tough clashes with sides inside the top eight on Tuesday.

Aitor Karanka's Middlesbrough side welcome Norwich City to the Riverside with an inconsistent recent record at home, but they have not lost there since late August.

Like Bournemouth, Wolves are one of the form teams in the second tier and moved within touching distance of Watford with a goalless draw against Birmingham on Saturday.

Wolves travel to Ipswich Town to face former manager Mick McCarthy, who will be looking for his side to record back-to-back league wins.

Derby County had previously held top spot but a 2-1 defeat at Brentford saw them slip to fifth, and Steve McClaren expects a reaction when they host Huddersfield Town.

Chris Powell's side will be no pushovers, though, as they showed to devastating effect against Nottingham Forest on Saturday, recording a 3-0 win.

Beleaguered Blackpool suffered an 11th league defeat of 2014-15 against Ipswich last weekend and go into a crunch clash with Fulham five points adrift at the bottom.

Both sides have struggled this season with Fulham pulling out of trouble under Kit Symons, while Blackpool will hope new manager Lee Clark can have an immediate impact.

Bolton Wanderers also remain in trouble despite improvements under Neil Lennon, who welcomes Cardiff City to the Macron Stadium aiming to get out of the bottom three for the first time since September.

Meanwhile, Blackburn Rovers travel to Millwall, Reading host Rotherham United and Forest will aim to end their dramatic slump against Brentford at the City Ground. Brighton and Hove Albion are at home to Wigan Athletic and Leeds United entertain Charlton Athletic in the remainder of the midweek programme.