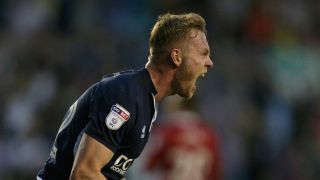 Leeds United's unbeaten start to the Championship season was ended by Millwall, as Wolves won at Nottingham Forest and Cardiff City snatched a last-gasp draw with Sheffield Wednesday on Saturday.

Preston North End are just two points off the top after a second win on the spin, while Ipswich Town moved back into the play-off positions with a victory over Bolton Wanderers.

Sheffield United's three-match winning streak was ended by Norwich City, but the Blades cling on to a spot in the top six with Middlesbrough and Bristol City closing in.

Leeds have made a brilliant start under boss Thomas Christiansen this season, but were beaten at the eighth attempt at as Aiden O'Brien fired home 17 minutes from time to earn a deserved three points for Millwall at The Den.

Diogo Jota was the hero with a second-half double either side of Mustapha Carayol levelling the scores for Forest.

Cardiff were on the brink of a second straight defeat as Gary Hooper made it four goals in four games with a powerful header from a flowing Wednesday move in the first half, but Sol Bamba's last-minute leveller left Cardiff level with Leeds and Wolves on 17 points, while the Owls drop to ninth.

Chris Wilder was sent to the stands as the Canaries won 1-0 at a Sheffield United side that had started the day in third. The Blades will now look to recover in next week's Steel City derby at Wednesday.

Daniel Johnson, Jordan Hugill and Tom Barkhuizen all scored as Preston – who are fourth – ran out 3-1 winners at Birmingham City, while Bolton Wanderers remain winless this term after going down 2-0 at fifth-place Ipswich.

Britt Assombalonga scored the winner as Middlesbrough twice came from behind to beat QPR 3-2 and move within a point of the play-offs, while Bristol City are eighth after battering Derby County 4-1.

Sunderland appeared on course for just a second league win of the campaign before David Meyler's 82nd-minute strike earned Hull City a 1-1 draw.

| celebrates after scoring the equaliser in today's 1-1 draw with September 16, 2017

Burton did secure a second league win, though, with a 2-1 triumph at home to Fulham, while Brentford drew 1-1 at home to Reading.