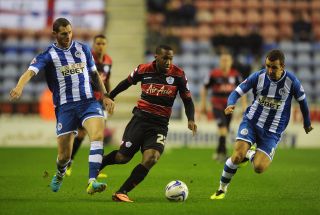 Harry Redknapp's side - who lost their first league game of the season at table-toppers Burnley on Saturday - failed to win again to remain third in the table.

Wigan, who are juggling Championship fixtures with their UEFA Europa League commitments, started the brightest, with Nick Powell forcing QPR goalkeeper Robert Green into a smart save.

Callum McManaman curled an effort just wide, while at the other end, QPR's best chance of the first half fell to striker Charlie Austin, but he failed to direct an Alejandro Faurlin cross on target.

Chris McCann then headed against the post for Wigan following a Jordi Gomez cross, with McManaman unable to turn in the rebound.

QPR brought striker Andy Johnson off the bench for his first appearance since August and he came close to breaking the deadlock, shooting wide following a Matt Phillips cross.

But there was to be no winner at the DW Stadium as both sides shared the spoils, with Wigan's point helping them to 13th in the table.