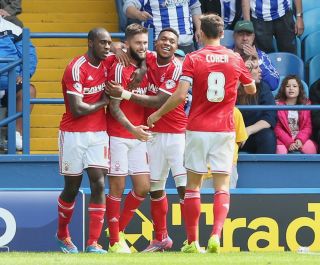 The Yorkshire outfit lost 4-1 at Watford last Saturday before third-tier Bradford City knocked them out of the League Cup four days later.

But with caretaker coach Neil Redfearn in charge, United did enough to see off Bolton in front of 21,901 fans at Elland Road.

Redfearn made six changes and saw left-back Stephen Warnock score the game's only goal with a low drive in the 17th minute.

Leeds goalkeeper Marco Silvestri then made an outstanding double save in the dying stages, denying former United striker Jermaine Beckford as the hosts held on. Leeds moved up to 18th in the table with the victory, while Bolton sit 22nd.

Forest continued their excellent start to the season with a 1-0 win at Sheffield Wednesday that came thanks to Henri Lansbury's first-half header.

Stuart Pearce's side – one of just two unbeaten teams in the Championship – have now won four matches in a row in all competitions.

Lansbury timed his run into the penalty area to perfection to nod in Michail Antonio's cross eight minutes before the break.

Watford and Wolves sit just one point behind Forest after 4-2 and 3-1 wins over Huddersfield Town and Blackburn Rovers respectively.

At the other end of the table, Blackpool remain without a point after suffering a 2-1 defeat at Millwall. Scott McDonald scored one and set up the other for Ian Holloway's side, who are now fifth.

Fulham climbed off the bottom but are still searching for their first win after Kenwyne Jones cancelled out Tim Hoogland's early strike in a 1-1 home draw against Cardiff City.

Wigan Athletic look to have recovered from their slow start as a second league win in a row lifted them to 12th.

Unlikely match-winner Lewis Dunk scored twice – including in the 93rd minute – as the defender helped Brighton and Hove Albion to a 2-2 home draw against Charlton Athletic.

Lewis Grabban scored against his old club but it was not enough to give Norwich City victory in a 1-1 draw against Bournemouth, while Reading edged Middlesbrough 1-0.