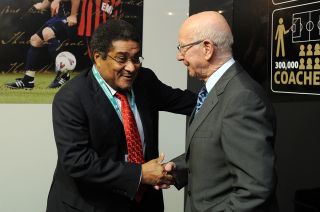 One of the most notable moments of Eusebio's distinguished career came in 1968, when Benfica played Manchester United in the final of the European Cup at Wembley.

With the score locked at 1-1 heading into the closing stages, the Portugal international had a powerful shot superbly saved by Alex Stepney and responded by stopping to applaud the United goalkeeper.

United went on to win 4-1, and Eusebio's gracious gesture has not been forgotten.

Former England international Bobby Charlton, who featured in the game, told the Football Association’s website: "Without doubt, Eusebio was one of the finest players I ever had the privilege to play against.

"Not only that, he was a true sportsman, as he proved in applauding Alex Stepney for his save in the European Cup final."

Recalling the incident, Stepney added: "He had the hardest shot in football and for me, luckily, I anticipated he'd stick it in my chest and it took us into extra-time to win the game.

"But the best thing about it, throughout his career he was respected and even when I made that save he stood and applauded me. Now you wouldn't get that today."

Elaborating on his respect for Eusebio, who scored 733 games in 745 professional matches, Charlton added: "His goals record, for Benfica and overall, is incredible and stands the test of time.

"I met him on numerous occasions after our playing careers had finished and he always represented both his club and his country in exemplary fashion.

"I feel proud to have been both an opponent and friend and am saddened to hear of his passing.

"My thoughts and prayers are with his family at this difficult time."

Stepney said: "When you play for Manchester United you get the chance to play against world-class players, and that's what Eusebio was.

"An absolute world-class forward, (he) scored unbelievable goals. It was an honour to play against such a great player.

"The supporters from that era in the sixties and seventies will always remember Eusebio."