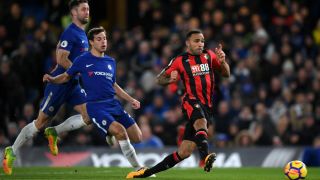 The defending Premier League champions toiled throughout January in their pursuit of a physical centre-forward to back-up Alvaro Morata with success finally achieved with the arrival of Olivier Giroud on Wednesday, hours before the deadline and too late for the former Arsenal man to be included here.

Callum Wilson put Bournemouth ahead after 51 minutes before Stanislas and former Chelsea defender Nathan Ake also got in on the act to hand Antonio Conte's men their third league defeat at Stamford Bridge this season.

A performance and result that will live long in the memory! | January 31, 2018

Chelsea's struggles were evident from the first minute with Bournemouth coping easily with what little was thrown at them.

Bournemouth looked a more cohesive unit and had the better of the early exchanges.

Stanislas had already tested Thibaut Courtois from 25 yards before another bright attack, which saw Fraser break clear down the right, was brought to a premature end by referee Lee Probert after he adjudged Wilson to have fouled Andreas Christensen.

Ibe then fired a powerful effort at Courtois before Chelsea twice threatened at the other end.

It was, in truth, a dire opening period, but the game opened up after the break.

Just six minutes had elapsed when Wilson played a neat one-two with Ibe before running on to the return ball and slipping it under the advancing Courtois.

Hazard saw an effort saved by Asmir Begovic but Bournemouth doubled their advantage after 64 minutes - Wilson playing in Stanislas who toe-poked into the net.

With Barkley already hauled off for Cesc Fabregas, there appeared no sign of a Chelsea comeback and it was no surprise when Bournemouth added a third.

The home side failed to clear a corner and when Ibe turned it back towards goal, Ake stuck out a foot to divert it past Courtois.

Alonso fired narrowly wide and curled a free-kick into the wall but Bournemouth's defences were not to be breached.