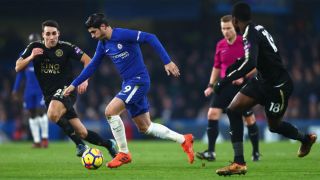 Chelsea missed a chance to go second in the Premier League as they were held to a 0-0 draw by a relentless Leicester City side that finished the match with 10 men.

Leicester put on a masterclass in pressing until Ben Chilwell was shown a second yellow card for a lunge on Victor Moses, but the champions were unable to take advantage and claim the three points that would have moved them above Manchester United.

Claude Puel welcomed Jamie Vardy back after two games out with a groin injury and the England striker, along with Riyad Mahrez, caused Chelsea no end of problems - his chasing of a long ball leading to returning captain Gary Cahill going off with a hamstring injury in the 33rd minute.

The Foxes had the better of the chances and Antonio Conte reacted by replacing Eden Hazard, ineffectual with Leicester's intense closing down robbing him of service, and Cesc Fabregas with Willian and Pedro before the hour mark.

A second booking in the space of five minutes for Chilwell meant Leicester had to play out the final 20 minutes a man light, and the Blues could not make their numerical superiority count.

Chelsea's fourth successive draw in all competitions could see them slip to fourth by the end of the weekend, while Leicester will take heart from a thoroughly deserved point at Stamford Bridge.

Leicester began with great energy and should have gone ahead when Chilwell cut back to Shinji Okazaki inside the six-yard box, only for the Japan international to steer over.

Vardy failed to hit the target from dangerous positions twice in less than a minute, before Wilfred Ndidi's free header following a corner was parried brilliantly by Thibaut Courtois and Antonio Rudiger stopped Aleksandar Dragovic slotting home on the follow-up.

Chelsea responded by launching a counter-attack from which Fabregas warmed the gloves of Kasper Schmeichel with a low drive from an acute angle.

Leicester continued to overrun the hosts, who were forced to replace the injured Cahill with Andreas Christensen just after the half-hour mark.

But Chelsea soon showed signs of getting to grips with the game, Alvaro Morata pulling a save from Schmeichel after charging in along the byline, while the Dane did well to tip a fierce Fabregas drive over three minutes before half-time.

Leicester were soon back on top after the restart. Mahrez was at the heart of the action for Puel's men and, after being refused a penalty having gone down softly as he ran at Christensen, he drove in from the right and saw a 20-yard shot deflect narrowly wide off the centre-back.

Conte had seen enough and replaced the disappointing Hazard with Pedro, while Fabregas got the chop for Willian as Chelsea switched to a 3-4-3.

The hosts were handed a boost when Chilwell was shown a second yellow card for catching Moses, but they found it difficult to create openings as Leicester sat back.

A 25-yard effort from N'Golo Kante was held by Schmeichel, before Tiemoue Bakayoko sent a pair of attempts from outside the box off target.

Morata's frustrations got the better of him as he picked up a yellow card for a petulant foul on Harry Maguire towards the end of another lacklustre showing, while Marcos Alonso had a stoppage-time free-kick pushed around the post by Schmeichel as Leicester kept Chelsea at bay.