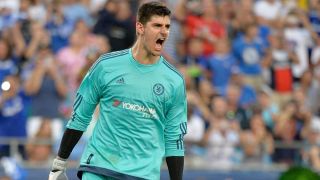 Goalkeeper Thibaut Courtois produced another brilliant display as Chelsea defeated European champions Barcelona 4-2 on penalties after the match ended 2-2 at the end of regulation in Washington DC on Tuesday.

Courtois was the hero in Chelsea's International Champions Cup shoot-out win over Paris Saint-Germain on Saturday, and he was at it again three days later, after team-mate Gary Cahill's 86th-minute header forced penalties at FedEx Field.

The Belgium international saved Gerard Pique's penalty, after Alen Halilovic chipped his effort into the crossbar as Chelsea emerged flawless from spot-kicks.

It was the Belgium show in the first half as a moment of sheer class from Eden Hazard and Courtois' goalkeeping heroics had Chelsea a goal to the good at the break.

Hazard danced his way past four opponents en route to goal in the 10th minute, while Courtois thwarted Luis Suarez on three occasions.

Suarez and Co. had other ideas in the second half, with Sandro Rodriguez putting Barca ahead in the 66th minute, after the former had equalised with a cheeky chip 14 minutes earlier.

But just as Barca were seemingly set to win in regulation time, Cahill stepped up and restored parity with four minutes remaining.

Chelsea stormed out of the blocks on the front foot, and centre-back Kurt Zouma almost headed the Premier League champions into a third-minute lead.

Mourinho's men got the goal they deserved seven minutes later thanks to Hazard, who skipped past four Barca players before he coolly slotted the ball underneath Marc-Andre ter Stegen.

The match ebbed and flowed as Barca slowly found their rhythm, but only the woodwork prevented Chelsea from making it 2-0 as Barca's back four struggled to contain the likes of Hazard and Costa.

Oscar's free-kick struck the crossbar in the 26th minute, with Ter Stegen rooted to his line.

Suarez - lively throughout the first half - thought he had equalised in the 31st minute but the Uruguay international was denied again by Courtois, who dived down quickly to his right.

Chelsea were a constant threat on the break and Costa wasted a golden opportunity to double the lead moments later after beating the offside trap and out-running his opponents, but the Brazilian sliced his effort just wide of the post.

Suarez engineered an opening for Rakitic to restore parity before the interval, however the Croatian midfielder skied his shot over the bar from just outside the six-yard box.

However, Suarez got the goal he deserved six minutes into the second half, scooping the ball over Courtois, despite Zouma's best efforts on the line.

Barca dominated from that point and hit the front courtesy of Sandro in the 66th minute. The youth graduate drifted onto his right foot and curled the ball beyond Courtois.

With time running out in Landover, Cahill courageously bundled his way to the ball and headed over substitute keeper Jordi Matip in the 86th minute - the Englishman left bloodied for his efforts.