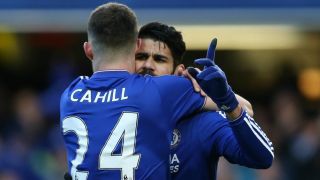 Chelsea avoided an FA Cup upset by comfortably beating League One opponents Scunthorpe United 2-0 at Stamford Bridge in the third round.

The Blues suffered an embarrassing 4-2 home loss to Bradford City in last season's competition, but a goal in either half ensured Guus Hiddink's men extended their unbeaten run to five matches since Jose Mourinho's sacking.

Diego Costa scored for the fourth time in three matches to put Chelsea ahead, before Ruben Loftus-Cheek's first goal for the club sealed their place in the next round of a competition that Hiddink won in 2009, during his last spell in charge of the Blues.

Scunthorpe will rue a penalty decision that went against them when they were only one goal down, referee Craig Pawson opting not to punish Ramires' second-half challenge on Kevin van Veen, while Jordan Clarke hit a post late on as Mark Robins' side gave a good account of themselves against the Premier League champions.

Chelsea were without the injured Eden Hazard, while other big names to miss out included Nemanja Matic, who was not involved, with Thibaut Courtois and John Terry remaining on the substitutes' bench.

But it only took 13 minutes for the hosts to go ahead. Branislav Ivanovic had space to cross from the right and Costa outmuscled defender Scott Laird to convert with a first-time finish.

Chelsea threatened to kill the game early on and Cesc Fabregas had a powerful long-range drive impressively tipped over by Scunthorpe goalkeeper Luke Daniels, who had to make another excellent stop at his near post to deny Pedro after he had raced on to Fabregas' high ball forward.

Oscar shot just wide after linking up with Costa, before Luke Williams' shot saw Scunthorpe force Asmir Begovic into action for the first time at the other end as Chelsea were unable to pull clear before half-time.

Scunthorpe were furious with Pawson as they were denied a penalty after the break when Van Veen appeared to be clipped under pressure from Ramires as he dribbled into the box.

There was no route back into the tie for Scunthorpe even though they made a good first of it in the closing stages.

Van Veen hit the side netting with a free-kick, Paddy Madden shot over as he cheekily attempted to chip Begovic, before the keeper had to push a thunderous effort from Clarke on to the right-hand post to deny the visitors what would have been a deserved consolation.