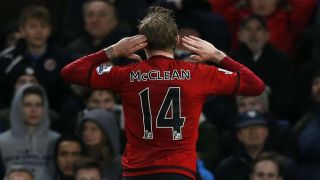 West Brom twice came from behind to earn a hard-fought 2-2 Premier League draw at Chelsea, who saw their mini revival under Guus Hiddink checked slightly.

Since the sacking of Jose Mourinho last month, Chelsea had won three and drawn two of their five games in all competitions ahead of Wednesday's meeting at Stamford Bridge, to raise optimism after a dreadful opening to their title defence.

But they came up against a stubborn West Brom side who had won each of their last two league outings and McClean capped his return to the side with the equalising goal four minutes from time.

The winger had been sent off for a wild hack on AFC Bournemouth's Adam Smith last month, but his contribution here will have undoubtedly pleased head coach Tony Pulis.

Chelsea were ahead midway through the first half thanks to Cesar Azpilicueta, before Craig Gardner - on as a seventh-minute substitute for James Morrison - levelled matters in the 33rd minute.

Gareth McAuley's own goal 17 minutes from time looked to have handed Chelsea the win that would see them leapfrog their opponents in the table, but McClean struck to further frustrate the reigning champions.

There had been doubts about Diego Costa's availability after he picked up a knock in the weekend's FA Cup win over Scunthorpe United, but the Spain striker showed no ill effects here as he surged forward and shot narrowly off target in the second minute.

Willian - so often a bright spark in Chelsea's troubled season - also fired just wide but the home side did not have to wait long for their lead, which arrived in the 20th minute.

A fine team move saw Costa and Willian combine to set up Branislav Ivanovic, whose low cross from the right was tapped home by Azpilicueta at the far post.

Costa ought to have doubled the lead when he collected Oscar's superb backheel only to blaze wildly off target.

And the hosts were made to pay for that miss as Pedro surrendered possession and the ball ran to Gardner, who arrowed a shot into the bottom-left corner from 25 yards.

Pedro was replaced by Kenedy at half-time, but the change initially failed to spark Chelsea into life as Salomon Rondon - also back in the side after getting sent off for a headbutt against Bournemouth - crossed for McClean to head weakly at Thibaut Courtois.

Claudio Yacob had perhaps been fortunate not to receive a second yellow card for a tangle with Oscar in the first half, and a similar incident involving Costa saw Pulis substitute the Argentinian and send on Saido Berahino on the hour.

Chelsea forged ahead again as Kenedy and McAuley challenged for Willian's cross and the ball struck the knee of the defender before defeating Boaz Myhill at his near post.

But there was to be one final twist as McClean curled home a precise effort with his weaker right foot from 20 yards to earn his side a point and leave Chelsea frustrated.