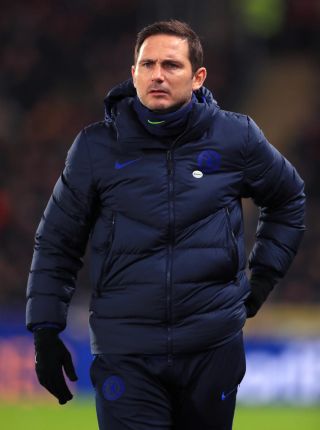 Chelsea boss Frank Lampard insists Harry Maguire should have been sent off before he scored the second goal in Manchester United’s 2-0 victory at Stamford Bridge.

Lampard lamented “confusing” Video Assistant Referee (VAR) decisions after Maguire avoided punishment for kicking Michy Batshuayi in the groin area, before the United skipper then thumped in a second-half header to seal the victory.

Anthony Martial also scored for United as they recorded a first league double over Chelsea for 32 years.

Giroud has the ball in the back of the net after a brilliant header from Mount's cross.— Chelsea FC (@ChelseaFC) February 17, 2020

Kurt Zouma and Olivier Giroud saw Chelsea goals chalked off by VAR in a hugely frustrating night for Lampard, who was left bemused by the officiating.

“Maguire should get a red card and then he scores the second goal, and the game changes off that,” said Lampard.

“That’s a major part of what VAR was for. The referee can’t see all the angles and if you’re not going to use the pitchside monitor, I don’t understand it.

“The Zouma goal should have stood. (Cesar) Azpilicueta gets shoved in the first place.

“It’s certainly not clear and obvious.

“The Maguire one, it’s just a wrong decision isn’t it, which is harder to take with the presence of VAR than it would have been before.

“Love it or hate it, if something happens and they don’t make the right decision, it’s very confusing to say the least. Everyone I’ve spoken to has said the same thing.”

Chelsea have now lost nine league matches and Tottenham would leapfrog them into the top four with a win at Stamford Bridge on Saturday.

But Lampard refused to consider any regrets about Chelsea failing to strengthen their Premier League top-four bid in the January transfer window.

“I honestly don’t want to talk about the window because it affects nothing now,” said Lampard.

“The reality is in what we see in front of us.

“Every week we look at the stats and it’s very clear we make as many chances as anyone else bar Liverpool.

“I don’t want to talk about regrets, the window is past now.

“We’re in fourth place by one point. So the season starts here and we need to try to get fourth place.

“We’re fourth and it’s still in our hands. I don’t think many people would have put us in fourth place at this point in the season. So the fight starts now.”

Chelsea’s disappointing night was exacerbated by a new injury to N’Golo Kante, with the France midfielder facing another spell on the sidelines.

The Blues are forced into an early change as Kante looks to have taken a knock. Mount is called into action from the bench.— Chelsea FC (@ChelseaFC) February 17, 2020

“It’s an adductor injury so we’ll have to assess it, but it doesn’t look great,” said Lampard.

Ole Gunnar Solskjaer insisted, however, that Maguire did not deserve to be dismissed, claiming the England defender had only sought to stop himself being hurt.

“For me I didn’t think two seconds about it at all,” said Solskjaer.

“I think he was fouled and rolled over, and it seems like Batshuayi was going to land on top of him, so he put his leg out to defend himself, protect himself, and it hurts definitely when you get hit there.

“Of course we want to be in the Champions League next year, and we’ve given ourselves a chance with this result, but we know that we need to improve.

“We’ve just got to get as many points as possible and hopefully get fourth.”