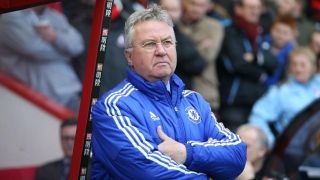 Guus Hiddink is eager for his Chelsea side to dent Tottenham's Premier League title challenge after watching them cruise to a 4-1 victory at AFC Bournemouth on Saturday.

Two goals from the fit-again Eden Hazard and further strikes from Pedro and Willian helped the Blues bounce back from two consecutive defeats and the travelling Chelsea supporters made their desire to see a similar result against their London rivals abundantly clear.

Second-placed Tottenham are Chelsea's next opponents, and Hiddink underlined his players' commitment to that game, saying: "We play the next game to win. And the next game is Tottenham.

On the win over Bournemouth, Hiddink said: "Of course we desperately wanted to win this game.

"We've got nothing at stake really and we talked about that in the week.

"But we don't want the season to fade away. The players responded very well.

"We are very pleased with the performance, especially the second half. I think it was a very open game.

"We made some little changes in the positions at half-time, and from then on I think we controlled and were dominant. The team enjoyed playing."

On Hazard, who netted his first two league goals of a largely forgettable season, he added: "It was not foreseen to play Hazard for 90 minutes but he enjoyed it so much he wanted to stay on.

"When he plays like this his confidence will grow. He's had a very difficult time, it has been frustrating [for him]."

Cesc Fabregas turned in an excellent display for Chelsea, providing assists for three of their goals, but the Spain international was concerned the game was "too open" for long periods.

He said: "We were a bit fortunate in the first 20 minutes. They started stronger than us.

"We managed to score the first goal and before half-time we scored the second, although to concede from a corner after training on them all week was a bit disappointing.

"The game was too open for the way we wanted it to be. It is the end of the season and all teams want to win, so maybe it was a bit more open than normal."

On his three assists, he added: "Sometimes you don't have it for a while and then all of a sudden in one game you get many. I am happy for the team performance and for my individual performance. I'm feeling good.

"We just want to finish the season with dignity, finish strong and finish well. Hopefully we can make the fans a little bit proud after a difficult season."