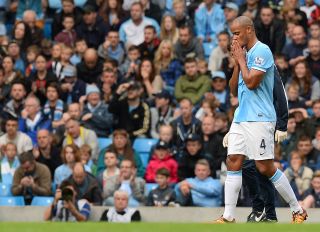 The 27-year-old defender, who has been struggling with a groin injury for the past few weeks, had an outside chance of making his return at Stamford Bridge, but will now have to wait a little longer.

And while the news that Kompany is still sidelined will come as a big blow to City, Pellegrini revealed that he has no other injury worries to contend with.

"Vincent is still injured, so he will not have a chance to play this game," he said. "Jack Rodwell and all the other players are fit."

The weekend's clash will see City gunning for their third Premier League victory in a row, but Pellegrini knows title rivals Chelsea, themselves in form after a seven-match unbeaten run in all competitions, will be fired up for Sunday's game.

"Of course it's an important moment, it's always important playing against a team that has a lot of chance to win the league," he added.

"It's a tough game for Manchester City. We are one point behind them and we must play well if we want to win."