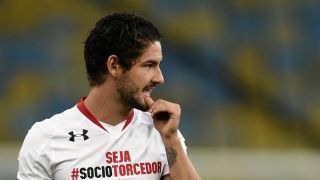 Alexandre Pato has completed his loan move from Corinthians to Chelsea until the end of the campaign.

Speculation had been widespread that the Brazil international would join up with the Premier League champions, with the news confirmed on Friday.

"I am so happy to sign for Chelsea. It is a dream for me. I am looking forward to meeting and getting to know my new team-mates and cannot wait to play," he told the club's official website.

"I thank Chelsea for their support and hope I can repay this faith to the club and its fans."

The 26-year-old netted 18 goals in 47 league appearances for Corinthians in 2015, and arrives as a welcome boost to Chelsea's forward line.

Both Radamel Falcao and Loic Remy are currently injured, while Diego Costa limped from the field during the second half of Sunday's 1-0 win over Arsenal.

Pato was widely thought of as one of the game's hottest properties following his move from Internacional to AC Milan in 2007.

The attacker helped Milan to the Serie A title in 2011, scoring 14 goals in 25 games, before returning to his homeland with Corinthians in 2013.