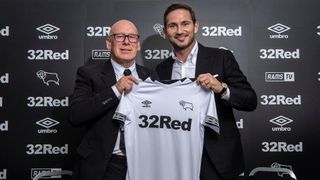 Chelsea great Frank Lampard has taken his first step into management with his appointment at Championship club Derby County.

Lampard emerged as a frontrunner at the weekend and swiftly became the favourite when he revealed Derby's interest. He signed a three-year contract on Thursday.

The Rams were on the lookout for a new manager after Gary Rowett departed for Stoke City in the wake of Derby's play-off semi-final defeat to Fulham.

While some are likely to point at his lack of experience, the 39-year-old is confident in his abilities after learning from the likes of Jose Mourinho and Carlo Ancelotti.

Speaking to Derby's official website, Lampard said: "This is my first job as a manager, but I've worked closely with some of the best coaches in the game and I'm confident in my own abilities and those of the team around me, including the board.

"I know it won't be easy – managing a football team never is – but I'm really looking forward to the challenge ahead."