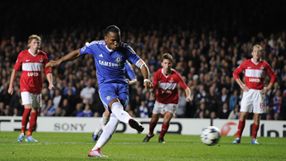 North London is still buzzing from Spurs' effervescent 3-1 win over Inter Milan on Tuesday but over in the west Chelsea fans have already forgotten Wednesday's 4-1 win over Spartak Moscow and are instead looking forward to Sunday's Premier League game with Liverpool.

The victory secured progress to the knockout stage with two games to spare and, as so often has been the case in recent years, was achieved with the minimum of exertion.

Chelsea lead group F with 12 points, six ahead of Spartak and Olympique Marseille, and look certain to top the group for the sixth time in eight campaigns.

Having reached the semi-finals five times in that period, going all the way to the final in 2008, it seems that the Londoners, under various managers, have mastered the art of doing just enough then kicking on when it matters.

After a turgid first half, when Chelsea seemed intent just to cover their defence, they swept Spartak aside with two goals for Branislav Ivanovic, a key opener by Nicolas Anelka and a Didier Drogba penalty. "There will be a long race getting to the final," said the latest man at the helm, Carlo Ancelotti.

"When you reach the first aim, which is to win the group, the next is to reach the final, and then to win that.

"I don't know if we can do this, but we have a possibility. We have the motivation but sometimes you have to be lucky also. We are working to play the last game at Wembley. In the final."

Ancelotti felt confident enough to rest captain John Terry on Wednesday and did not risk Michael Essien, who has a minor toe injury. With Frank Lampard missing most of the season so far after hernia surgery and new signing Yossi Benayoun also a long-term absentee, the manager has plenty of resources to call upon in the New Year.

He is adding to his options too by giving more and more game time to youngsters like Gael Kakuta, Daniel Sturridge and 17-year-old Josh McEachran, who all came on once the game was safe on Wednesday.

"They haven't got the experience yet but I have trust in these young players," Ancelotti said.