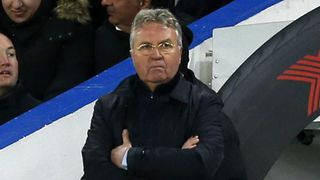 Chelsea manager Guus Hiddink revealed there was little to report when it comes to any potential business in the January transfer window.

Hiddink feels the return to fitness of back-up striker Loic Remy, as well as uncertainty over whether the club will be a Champions League team next season and an unknown future management team, means little is likely to happen this month.

The Dutchman had previously been concerned by Chelsea's lack of attacking options but has been relieved by Remy's return to the squad after injury.

"I am happy that Remy is now working a full week with high intensity and if needed he can be on the pitch," he said.

"That is a little bit new for me, but it is good. As long as this is happening we are not very active in doing other things."

Asked if the current uncertainty at Chelsea meant everything was "on hold" in the transfer market, Hiddink replied: "I think so. This is a realistic view and Chelsea has to deal with that.

"Also in a new setting you never know if there shall be the influence of the new staff, new manager – they are question marks for Chelsea and for others who have to say yes or no to coming in. That is the reality of Chelsea nowadays."

Hiddink struck a similar tune when asked if reports linking the club to Brazilian striker Alexandre Pato had any substance.

He said: "No - on strikers I repeat now we have Diego Costa, Remy back and some youngsters who can fill up the gap so we are not in for that [a striker] at the moment."

Despite his shortage of forwards, Hiddink confirmed he had been willing to let Radamel Falcao move on when he has returned to fitness after Monaco announced they would not be taking him back due to his injury woes.

"For him it is important to start playing because if you see his recent path here and also Manchester United, not playing that is difficult for a player," he added.

"So he must look for circumstances where he can play, that I can understand."