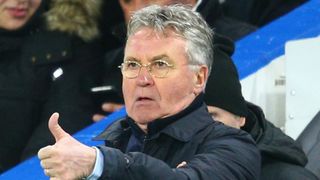 Chelsea manager Guus Hiddink has told his players ahead of the visit of Everton they cannot afford to drop more points at home if they are to have any chance of finishing in the Premier League's top four.

The champions are unbeaten in the league since Jose Mourinho's sacking last month, but only two of those five matches have been wins, with the other three draws, including Wednesday's feisty contest at home to West Brom, which ended 2-2.

As a consequence Chelsea remain 14th in the table and are 12 points adrift of fourth-placed Tottenham going into the clash with Everton at Stamford Bridge on Saturday.

Hiddink has continued to state Champions League qualification is the club's goal as long as it remains mathematically possible, but the interim coach knows his team's chances are running out if they keep dropping points.

"As long as it is possible mathematically to get fourth position, we will go for it," he told Chelsea TV.

"We have to win all our games, at home at least. We need an average of 2.8 points which is difficult - you have to win your games at home.

"West Brom was a very entertaining game - high intensity, high speed and high tempo from both sides. But at the end we like to win, especially with the week we have.

"We are into the next round of the FA Cup and we have the Everton game on Saturday. It would have been the perfect week if we could have won all three and that was the target."

History is on Chelsea's side going into the game. They are unbeaten in their last 20 home league matches against Everton, whose manager Roberto Martinez has lost on all six of his trips to Stamford Bridge.

Goalkeeper Thibaut Courtois feels luck has not been on the side of Hiddink's men in recent weeks, but vowed to keep battling.

"The goals we conceded against West Brom were unlucky," he said.

"That is the position we are in at the moment. They were goals maybe last year we didn't concede because we were up top and now they are the kind of goals you concede because you are down there.

"We have to keep on fighting, we have Everton now which will be a difficult game as well but we have to fight for every game and every point."

Everton come into the game four points better off than Chelsea and on the back of a solid 0-0 draw at Manchester City, but Phil Jagielka still sees the need for improvement after winning once in eight league games.

The England international said: "In the second half [at City] we let ourselves down a little bit on the ball. Thanks to some good defending and fantastic goalkeeping, we managed to keep it at 0-0.

"The games are going to come thick and fast now, we have got Chelsea away on Saturday, so it will be an interesting couple of weeks or so."

Eden Hazard and Radamel Falcao are both out with groin injuries, while the visitors will check on Steven Naismith (hamstring) and Tom Cleverley (calf). Seamus Coleman (calf) and James McCarthy (groin) are unavailable.

- Chelsea have won the last two home games 1-0 against Everton with goals scored in the 89th and 90th minute.
- Everton have lost just one of their 10 Premier League away games this season (W3 D6 L1).
- No side has lost more points from leading positions this season than Chelsea (12 – level with Bournemouth and Newcastle). They only dropped 15 throughout 2014-15.
- Romelu Lukaku needs two goals to match his best Premier League goal tally for a season (17 in 2012-13 while on loan at West Brom).
- Chelsea have conceded 31 times in their opening 21 matches this season, their highest total in a Premier League season at this stage.
- Steven Naismith has scored six Barclays Premier League goals against Chelsea; four more than against any other side.