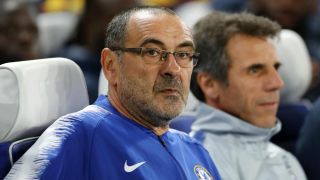 Maurizio Sarri generally welcomes the footballing common ground shared by himself and Pep Guardiola, although he was jolted by an uncomfortable parallel two weekends ago.

Taking an undefeated record to Wembley, Sarri's Chelsea were ransacked by Tottenham as they went down to a resounding 3-1 London derby defeat.

Guardiola's maiden loss as Manchester City manager occurred in similar circumstances in October 2016. Having started life in the Premier League with six wins out of six, Mauricio Pochettino's Spurs beat City 2-0 at White Hart Lane – a scoreline that flattered the visitors – and Guardiola's first bid for the English title never truly recovered.

The picture is, of course, very different now. City head to Stamford Bridge on Saturday with 41 points from 15 unbeaten matches, defending a Premier League crown they secured in record-breaking fashion.

Meanwhile, Wednesday's 2-1 defeat at Wolves means Chelsea have won only one of their previous four league games, suggesting Sarri is in the midst of the first-season slump his friend endured. But Guardiola's achievements in England probably bode well for a kindred tactical spirit.

That 2016 loss at Spurs was the second of six consecutive winless games in all competitions for the Catalan and began a torrid three-and-a-half month spell, which remains the closest his gilded coaching career has come to a crisis.

It took in a 4-2 humbling at Leicester City – a game that preceded Guardiola's infamous "I am not a coach for the tackles" remark that only fanned the flames for detractors gleefully pouring petrol on his reputation.

beat Manchester City 4-2 at King Power Stadium one year ago today! See all the goals here for free f December 10, 2017

The argument that Guardiola's method, in all its unflinching, attacking boldness, could not work in England was obviously blown out of the water last season to the tune of 100 points.

Jurgen Klopp's Liverpool are also unbeaten in the top flight this term, meaning two sides who press with a maniacal relentlessness in the opposition half are doing so week after week and reaping rewards. It turns out you can do that in England, too.

Guardiola's Juego de Posicion and Klopp's Gegenpressing meant the arrival of "Sarriball" in the Premier League did not meet the scepticism it would have done only a couple of years ago.

Sarri famously shared dinner with Guardiola and Italian coaching great Arrigo Sacchi over the close season, with both citing the ex-AC Milan boss as an inspiration.

Sacchi's guiding influence can be seen in both men's commitment to a high defensive line and forward players being bound by a non-negotiable pressing pact.

As such, Sarri's flying start in the Premier League meant eyebrows raised no higher than the Italian's own often-peaked expression. We'd seen this before, so why wouldn't it work for the celebrated former Napoli coach?

This acceptance meant the Spurs defeat came as a jolt, with one counter-intuitive aspect of Sarri's selection drawing ire. A midfield calibration that has been waiting to catch him out.

Having persuaded Jorginho to eschew Guardiola's advances and become his deep-lying playmaker, Sarri had the vital cog he needed to make everything tick. Displacing N'Golo Kante – not unreasonably found to be the world's outstanding holding midfielder in this week's Ballon d'Or vote – was fine as long as Chelsea were taking teams apart on the front foot.

The sight of Kante upfield as Son Heung-min tore past Jorginho and capped an eviscerating outing obviously jarred. The France international would have emerged with the ball or introduced Son to the Wembley hoardings, so the consensus went.

In those sort of top-six clashes, it is easy to see the attraction of Sarri deploying Kante alongside Jorginho to snuff out high-class opponents. Just don't expect him to do it against City, or ever.

Chelsea's squad remain in the early stages of their Sarri indoctrination. Over recent weeks he has passed comment upon the tactical awareness and development of Kante, Ross Barkley and Ruben Loftus-Cheek.

The message is clear. Jorginho playing at the base of the midfield is not a problem, rather a fundamental necessity. Sarri is challenging his other players to perform with a positional discipline that means the Italy schemer is not exposed as he was against Spurs.

Guardiola went through a similar teething phase. John Stones, for example, would not stop passing out from centre-back despite several high-profile errors; he would do it more often, with more confidence and push City higher and higher up the pitch.

It is easy to envisage howls of derision if David Silva, Bernardo Silva and the rest slice through a flailing Chelsea midfield on Saturday. But Sarri will stick to his guns and, in the opposite dugout, the trigger-happy Chelsea hierarchy should see the reason to hold their nerve in the long term.