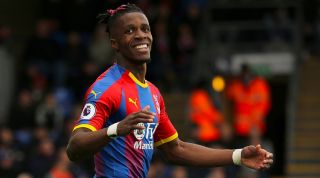 Zaha was left in limbo on deadline day after Crystal Palace recieved no bids for the wantaway winger, who the day before handed in a transfer request.

The Ivorian was subject to bids from both Arsenal and Everton throughout the summer, but Palace stood firm on the valuation of their prized asset.

Crystal Palace manager Roy Hodgson yesterday said he sent Zaha home from training because "he wasn't in the right frame of mind".

And with Everton's last minute purchase of Alex Iwobi from Arsenal, who themselves bought Nicolas Pepe this summer, it seemed Zaha had missed the boat on a big money move.

However, according to the Sun, Chelsea will weigh up an £80million bid for Zaha in January.

The move would be dependent on whether Chelsea are able to overturn their transfer ban through the Court of Arbitration for Sports.

The Blues are thought to be confident of a decision in their favour and that they can start buying players again in the new year.

Zaha's 10 goals and 10 assists last season is the kind of output that would help plug a hole left by Eden Hazard at Chelsea.