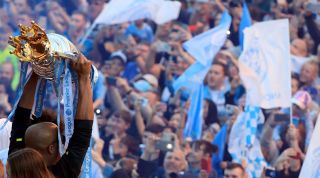 Readers, beware: this is not necessarily the table that you’ll see in our sparkly Season Preview issue. While not much has changed, enough has since we went to print for us to make some more informed decisions about the season ahead.

But that still means little, of course – with so many huge questions to be answered, calling the 2019/20 Premier League table is no easy feat. But we’ve given it a crack anyway…

SEE ALSO BT Sport on Sky offer: how to save up to £60 a year with money off every month

They’ve rightly won a lot of admirers, but do they have enough quality? The Blades have broken their transfer record four times this summer, culminating in the £17.5m arrival of Swansea’s Oli McBurnie – one of four Championship arrivals.

Ravel Morrison is comfortably the most interesting of all, but nobody is quite sure what version of the midfielder we’ll get in 2019/20. Sheffield United have a fine manager to steer them in Chris Wilder, but even the experimental 51-year-old might find this a challenge too far.

New manager, new style, but familiar failings could spell a very long season. In fairness, Graham Potter looks like a fine choice of manager to replace Chris Hughton and has at least tried to breathe life into last season’s insipid side.

But how quickly can £18m Belgian Leandro Trossard adapt? Is centre-back Adam Webster good enough for the Premier League? And can Neal Maupay translate goals in the Championship to impact at a higher level? These are all big questions – and the jury’s out until the Seagulls can start answering them positively.

Palace must improve their woeful home form to steer clear of trouble, but this has not been a good summer for them. They kept hold of Wilfried Zaha in the end, but the talismanic local boy was furious with his club’s demands that ultimately meant he missed out on a move to Arsenal and Everton.

Aaron Wan-Bissaka was sold to Manchester United and not replaced. Incomings have been decidedly ‘meh’: Victor Camarasa is the pick of the bunch on loan, adding to the unspectacular arrivals of Jordan Ayew (permanently), James McCarthy and Gary Cahill. This could hurt.

The attacking riches at Daniel Farke’s disposal could be enough to sneak survival, but right now it’s difficult to judge the Canaries. Their squad certainly lacks Premier League experience, although that might not faze a well-organised team with some fine individual talents (namely Emiliano Buendia, Max Aarons and last season’s 29-goal Teemu Pukki).

Very much a wait-and-see job at this stage.

“What if Rafa goes?” fans asked – and now they’ll find out. Steve Bruce became the unpopular Chosen One to replace him by Mike Ashley, but business since then has been a little more promising.

Replace Tammy Abraham’s goals from last season and survival is realistic, not least with Jack Grealish and John McGinn providing such quality in midfield. It remains to be seen whether Brazilian striker Wesley is that player – but with only Jonathan Kodija and Keinan Davis in reserve, he’ll need to be.

As Alex Keble notes, neutrals are expecting the unexpected from Villa in 2019/20; they’ve signed 12 players and spent over £140m, after all.

Eddie Howe will want progress, but another season of treading water awaits for the Cherries unless they can magically improve a defence that bettered only Fulham and Huddersfield’s last season.

Transfer business has followed a similar pattern: all five of their major arrivals (Harry Wilson on loan, plus Jack Stacey, Philip Billing, Lloyd Kelly and Arnaut Danjuma) are 23 or under and largely unknown quantities are this level. But it could be a lot of fun.

Expect improvements, shorn of last season’s European distractions. Finishing 15th was fairly welcome after a terrible start, and it seems more likely that the Clarets will improve rather than regress under Sean Dyche this term.

Re-signing Jay Rodriguez is arguably one of the deals of the summer, and a deadline-day loan for Chelsea’s Danny Drinkwater could be inspired if the central midfielder can rediscover anything like his Leicester form. A tall ask, maybe – but it shouldn’t define Burnley’s season.

QUIZ! How many of the 40 biggest Premier League summer transfer deadline day deals can you name?

It will be fascinating to see Ralph Hasenhuttl’s impact over a full Saints season. The south coast club looked far better under him than Mark Hughes last term, and they should improve on 2018/19’s dismal 16th-place finish.

Che Adams improves a blunt strike force, complementing Danny Ings (who joined permanently from Liverpool). Tying down Nathan Redmond to a new contract is also fine business, and they haven’t lost anyone they didn’t want to. In all, not much to dislike.

Much rests on how the Hornets start their season. The top half is a possibility, especially having kept key midfielder Abdoulaye Doucoure and manager Javi Gracia (previously linked with Chelsea before Frank Lampard’s arrival).

They haven’t done all that much this window – late deals for Rennes’ Ismaila Sarr and freebie Danny Welbeck adding to their one for West Brom defender Craig Dawson – but then they needn’t have done.

Improve their consistency and the Hammers are an outside bet for Europe. Like those above them, they too will be pleased with their summer lot: Sebastien Haller is the headline arrival up front and looks capable of finally ending the club’s miserable run of signing inadequate strikers.

Manuel Lanzini is fully fit after missing most of last season, and will get to share some of the creative load with new signing Pablo Fornals. Chuck in Felipe Anderson and Manuel Pellegrini’s side could be exciting indeed – going forward, at least.

Consolidation, with a run in Europe, may be on the cards for Nuno Espirito Santo’s relatively thin squad. The Portuguese has done some shrewd business this window, however: Jesus Vallejo looks a solid arrival to bolster Wolves’s central defensive options, and Milan’s Patrick Cutrone is the Raul Jimenez alternative they were crying out for.

With a team capable of going reasonably far in the Europa League, might those exertions prevent them from achieving more on the domestic front? History suggests yes.

After 2018/19’s green shoots of growth, it’s time the Toffees kicked on. And the signs look promising – namely, in the form of striker Moise Kean, who could transform Everton’s attack following his £29m move from Juventus.

Losing Idrissa Gueye has been an expected blow, as was not re-signing Chelsea loanee Kurt Zouma on a permanent transfer. On the flip side, Fabian Delph, Andre Gomes, Mainz midfielder Jean-Philippe Gbamin and Monaco loanee Djibril Sidibe all look like smart acquisitions. They’ll be aiming much higher than this.

Frank Lampard will get Blues fans onside – and he’ll need to. It could be a long season. A transfer ban meant Chelsea have been restricted to tying up last season’s underwhelming loanee Matteo Kovacic, having lucked out in January by agreeing a deal for Christian Pulisic.

It’s therefore on Lamps to make the best of what he’s got with a ragtag bunch of returning loanees and promising youth players. Big seasons lie ahead for Tammy Abraham and Christian Pulisic.

Revitalised under Brendan Rodgers, the Foxes are gunning for the top six this season. They may have lost Maguire to United, but made their summer with the brilliant permanent acquisition of last season’s mercurial loanee Youri Tielemans.

Ayoze Perez has joined from Newcastle to back up Jamie Vardy, while Belgian playmaker Dennis Praet arrived on deadline day from Sampdoria in a bargain €20m deal. The only way is up.

A potential tipping point at Old Trafford. Will it get any worse before it gets better? Ole Gunnar Solskjaer has managed to improve a weak backline with Aaron Wan-Bissaka and Harry Maguire, but that midfield still looks suspect.

With Romelu Lukaku leaving for Inter Milan, a lot rests on the shoulders of Marcus Rashford at the sharp end – unless Alexis Sanchez decides he wants to be a footballer again, that is.

Where there’s that front three, there’s hope – if Unai Emery can fix that defence, that is. Nicolas Pepe is a thrilling arrival from Lille after striking 22 goals last season, and Real Madrid loanee Dani Ceballos a smart replacement for Aaron Ramsey.

Laurent Koscielny is gone, but he has arguably been upgraded in the £8m David Luiz – discarded by Chelsea on deadline day. The Gunners finally landed Kieran Tierney, too, making this a good window in the end.

No fallow summer this time: Spurs spent a club record £55m on Tanguy Ndombele to beef up their midfield, and have added yet more quality in the form of Real Betis’s Giovani Lo Celso. Toby Alderweireld has stayed put despite a remarkably low release clause remaining untriggered.

There’s still a question mark at right-back after they failed to replace Kieran Trippier, but in bringing it back home to their own corner of north London, Spurs are the most likely Big Two challengers.

RANKED! Every Premier League manager by their job security in 2019/20

Another nearly season in 2018/19, where Jurgen Klopp’s side came agonisingly close to toppling Manchester City. To go one better will be incredibly difficult in 2019/20, not least with an unhelpful Club World Cup campaign to come in the middle of the season.

There have been no marquee signings – understandably – making improvements tough to foresee. But if the Reds finish like last term, who knows?

The perfect team keeps improving. City needed a younger defensive midfielder to replace the ageing war horse Fernandinho, so spent £63m on the highly-rated Rodri. Gone is Danilo, upgraded for Juventus right-back Joao Cancelo. More cover at left-back with the re-signing of Angelino.

How can you look past them for another title? Do it again, and immortality awaits.