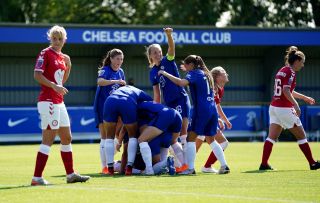 Ruthless Chelsea thrashed Bristol City 9-0 at Kingsmeadow to give the reigning champions their first win of the campaign.

The hosts looked bright all over the pitch but it was Fran Kirby who got them off the mark in the 15th minute.

Her shot into the bottom right-hand corner squirmed through City goalkeeper Sophie Baggaley’s hands to give Chelsea their first goal of the afternoon.

City managed to keep Chelsea at bay until the 31st minute, but the Blues then started to move through the gears.

Ji So-yun was brought down in the box after a probing midfield run and Maren Mjelde calmly powered the penalty into the top right-hand corner to double the lead.

Three minutes later, summer signing Melanie Leupolz made it 3-0 when she thundered home a header from an Erin Cuthbert free-kick.

Cuthbert added her own name to the scoresheet in the 36th minute when her shot from outside the box flew past Baggaley into the bottom left-hand corner, before Millie Bright made it five on 40 minutes with a looping header from an inviting Mjelde free-kick to close a dominant first-half display.

The second half continued in the same vein, with Beth England adding a sixth in the 65th minute when she volleyed in a rebound after the Bristol defence could not clear their lines.

Charles then turned provider in the 73rd minute when she squared for Harder to cleverly find the bottom right-hand corner with a flicked finish and kick off her own Chelsea campaign.

Sam Kerr became the ninth different scorer of the afternoon when she capitalised on a Harder through ball to cap off a slick Chelsea display.