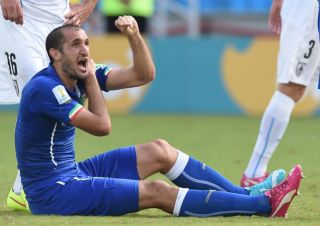 The incident occurred during the decisive FIFA World Cup Group D clash in Natal, with Diego Godin bundling in the winner shortly after for a 1-0 win as Uruguay progressed.

However, almost all the talk following the fixture will centre on Suarez, with Chiellini describing his actions as "shameful" in a fixture that also saw Claudio Marchisio sent off for a high tackle.

Suarez has previously been involved in such incidents at Ajax and Liverpool, and Juventus defender Chiellini has called on FIFA to take action against the forward.

"It was absolutely shameful," he told Sky Sport Italia. "The game was decided by the referee and if one team should've gone through it was us.

"Suarez is a sneak and he gets away with it because FIFA want their stars to play in the World Cup. I'd love to see if they have the courage to use video evidence against him.

"The referee saw the bite mark too, but he did nothing about it.

"Sending Marchisio off and not carding Suarez was decisive. There were other incidents and a different treatment in the first half too.

"As long as we had 11 men, we were in control and Uruguay were never dangerous. Obviously with 10 men in the last half-hour it was tough and we suffered, then were punished by a set play."