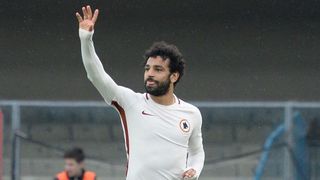 Stephan El Shaarawy and Mohamed Salah scored two goals each as Roma beat Chievo 5-3 to ensure they delayed Juventus being crowned champions and will go into the final Serie A game of the season in second place.

Roma were one point clear of third-placed Napoli and four behind leaders Juve - who can wrap up the title on Sunday - going into the game, but Chievo took the lead against the run of play after 15 minutes when Roberto Inglese's header fell to Lucas Castro inside the box and the Argentinian winger lashed the ball into the net from close range.

Roma were level after 28 minutes when El Shaarawy received the ball just outside the penalty area and turned the on-rushing Stefano Sorrentino before firing the ball into the net for his seventh league goal of the season.

Despite looking dangerous with every attack, Luciano Spalletti's men left gaps at the back and Inglese was unmarked when he headed Valter Birsa's cross into the net after 37 minutes to make it 2-1 to Chievo.

Salah missed the chance to equalise when Sorrentino saved his bullet header moments later, but the Egyptian made amends after 42 minutes when he received the ball on the right flank and cut inside his marker before sending a deflected shot into the net to leave the scores level at half-time.

The pick of the afternoon's goals put Roma in front after 58 minutes, when Kevin Strootman showed great vision to split Chievo's defence and put El Shaarawy clean through and he took a touch before firing in at the far post from an angle.

A delightful pass from Edin Dzeko put Salah through to score his second of the match after 76 minutes. And Dzeko sent a thunderbolt of a shot into the net seven minutes later to make it 5-2.

Inglese scored a late consolation for Chievo, but the attention in the final moments was on Roma substitute Francesco Totti, who played the last five minutes of what is likely to have been the penultimate game of his brilliant career.

- Stephan El Shaarawy has found the net in three Serie A games in a row for the first time since December 2012.
- Roma have scored 87 Serie A goals this season, equalling their record in the league from 1930-31 (87 goals in 34 matchdays).
- Lucas Castro has scored five league goals this season, more than in any other Serie A campaign.
- Mohamed Salah has been directly involved in 11 goals in his last nine Serie A appearances (6 goals, 5 assists). He has netted 15 goals in this Serie A, one more than in the last league.