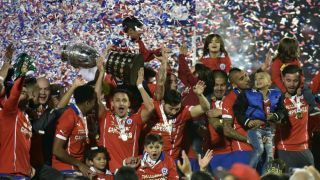 Argentina remain top of the FIFA rankings, with Belgium climbing above Germany into second.

Chile – who beat Argentina in the Copa America final – move back into the top 10 at the expense of Netherlands, Danny Blind's side drop seven places as points collected during the 2014 World Cup begin to lose their value.

Netherlands' drop sees the majority of the top 10 jump up one place, apart from Colombia - who remain in fourth.

Further down the rankings CONCACAF Gold Cup winners Mexico made a 14-place rise following their success in Canada and the United States, the Central American nation moving to 26th.

Meanwhile the side they beat in the final, Jamaica, are the biggest movers as their exploits during the competition earned them a new ranking of 55, moving up 21 places.