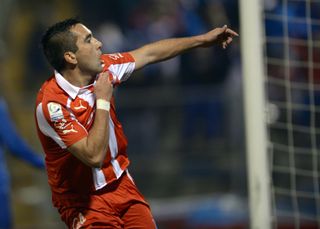 Martin Lasarte's men enjoyed a dynamic start to the game with Argentine striker Ismael Sosa putting Catolica ahead within the first minute before Michael Rios converted a penalty in the 10th minute to double the lead.

But Palestino refused to yield as Roberto Gutierrez pulled a goal back on 24 minutes.

Catolica restored their two-goal lead in the 31st minute through Milovan Mirosevic, but a resilient Palestino gave themselves a chance early in the second-half with Javier Capelli's 47th-minute strike.

Within the next nine minutes, Catolica ended the game with goals to Nicolas Castillo and Fernando Meneses before Sosa completed his brace on 81 minutes.

There was still time for an 88th minute consolation goal for Palestino through Diego Chaves.

Rubio had a brace by 18 minutes and completed his hat-trick in the 31st minute after Sebastian Ubilla's strike seven minutes earlier.

The dominant striker scored his fourth goal on 56 minutes, completing the rout.

Cobreloa missed the opportunity to leapfrog Catolica at the top of the standings as they drew 1-1 at Audax Italiano.

Bryan Carrasco delighted the home fans in giving Audax the lead on 35 minutes but Cobreloa's Hugo Droguett forced an equaliser in the 48th minute.

In other results, Union Espanola overcame 10-man Nublense 2-0, Santiago Wanderers drew 2-2 with O'Higgins and Universidad Concepcion won 3-2 at Everton despite playing a man down for 85 minutes.

Cobresal defeated Rangers 2-0, Deportes Iquique won by a 2-1 score-line against Union La Calera and Huachipato fought out a 0-0 draw with Colo Colo.