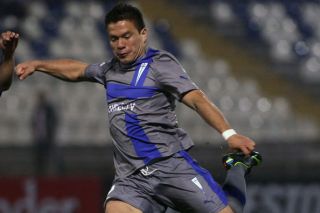 Colo Colo dropped points for just the second time this season as they were held to a 0-0 draw at Cobreloa.

Universidad Catolica capitalised thanks to goals from Dario Bottinelli and Alvaro Ramos on Monday, moving to within four points of the unbeaten leaders.

Bottinelli struck on eight minutes for the visitors at the Wanderers' Estadio Elias Figueroa Brander as his free-kick from wide on the left floated over goalkeeper Jose Lafrentz.

It got worse for the hosts on 24 minutes as Sebastian Pol was shown a straight red card.

Universidad finally sealed the points on 80 minutes as a counter-attack led to a three-on-one and Ramos finishing neatly.

Third-placed O'Higgins missed their chance to get closer to the top after being held to a 0-0 draw at home to Universidad Concepcion.

Universidad Chile ended their three-game winless league run with a 3-1 victory at home to Deportes Iquique.

Patricio Rubio scored a brace, either side of Fabian Carmona's 56th-minute goal, to see the hosts to a come-from-behind win.

Nublense edged past Audax Italiano 2-1 and Huachipato's 1-0 win over Cobresal lifted them up to 10th.

Everton bounced back to winning ways with a 1-0 victory at home to Union La Calera and Antofagasta were 3-1 victors at bottom side Rangers.