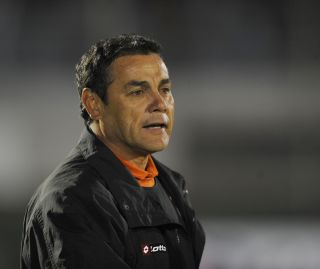 With the Clasico Universitario between Universidad Chile and league leaders Universidad Catolica suspended after a player from the latter club was hit by a projectile and O'Higgins succumbing to a 3-2 loss to visiting Colo Colo, Cobreloa pounced on Sunday with a 1-0 win over Union La Calera.

Ivan Ledezma scored the only goal of the game for Jorge Garcia's Cobreloa in the 63rd minute as the northern club notched their first win in five matches in all competitions to rise to 21 points for the season.

Cobreloa trail Catolica by just three points, although the league leaders have a game in hand, as they will have to play Universidad Chile again on Monday behind closed doors.

The derby between Santiago's two university-based football clubs was called off just after half-time when Catolica's Fernando Meneses was struck by a projectile thrown from the stands.

O'Higgins remain second on the table with 22 points despite their loss to Colo Colo, who rose to ninth on the back of their victory on Saturday.

A pair of first-half penalties gave Colo Colo the ascendency in the opening half hour as Gonzalo Fierro and Emiliano Vecchio converted from the spot, while Jose Fuenzalida's 36th-minute goal made it 3-0 to the visitors.

While another penalty, this time converted by O'Higgins striker Pablo Calandria, gave the home side some hope with 21 minutes remaining in the second half, they were unable to reel in Colo Colo, despite Francisco Pizarro also scoring in the 75th minute.

Cobresal remain fourth on the table with 20 points despite losing 2-1 away to Nublense, while Huachipato opened the 12th round of the Primera Division with a 2-1 victory over bottom club Audax Italiano on Friday.