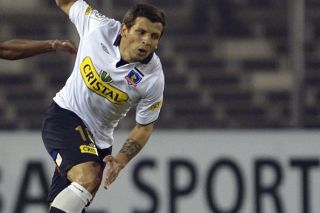 For the second time in as many matches, Colo Colo scored five as they overcame Huachipato 5-3 in a thrilling encounter at the Estadio Monumental David Arellano.

Esteban Paredes was the hero with a hat-trick, while Emiliano Vecchio and Mauro Olivi were also on the scoresheet for Hector Tapia's men.

The victory kept Colo Colo two points clear of O'Higgins at the top, while Palestino slipped to third after their first loss of the season.

Colo Colo struck three times in the opening 39 minutes, with Paredes netting either side of Vecchio's goal.

Francisco Arrue gave the visitors some hope of a comeback when he put away a penalty in first-half additional time.

When Lucas Simon pulled back another goal nine minutes after the break, the comeback looked on.

Palestino suffered their first loss of the season as they were beaten 5-3 at Universidad Catolica despite Renato Ramos' brace.

Dario Bottinelli scored a brace of penalties for the victors, who were never headed after going ahead in the seventh minute.

Along with Colo Colo, O'Higgins remain the league's only other unbeaten team after a 2-0 win over the Santiago Wanderers lifted them up to second.

Bottom side Everton claimed their first points of the season, holding on for a 3-2 win at Universidad Concepcion.