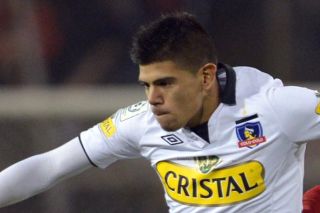 Hector Tapia's men remain unbeaten through six matches and their fifth win of the campaign came in comfortable fashion.

Gustavo Canales pulled a goal back for the hosts before Mauro Olivi restored Colo Colo's three-goal lead late on.

Valdes put Colo Colo on track when he opened the scoring in Santiago de Chile in the 10th minute.

With his fifth goal in the league this season, Paredes doubled the visitors' advantage in first-half additional time.

Valdes' effort on 63 minutes sealed the three points despite Canales giving the home side hope, and Olivi added another with three minutes remaining.

Dario Bottinelli's 90th-minute goal saw Universidad Catolica keep the pressure on the leaders with a 1-0 win at Cobresal.

Eduardo Farias was sent off on 28 minutes for Cobresal but they continued to deny Catolica until the final minute.

O'Higgins and Palestino are third and fourth respectively after playing out a 1-1 draw with both goals coming in the final half-hour.

Deportes Iquique made it back-to-back wins thanks to Exequiel Benavidez, whose 84th-minute goal saw them past Huachipato 1-0.

Rangers were too good for Cobreloa in a 2-1 win and Union La Calera held on for a 1-0 victory at Audax Italiano.

Bottom side Everton drew 1-1 at home to Antofagasta and Santiago Wanderers came from behind to beat Universidad Chile 2-1.